Don’t be me this weekend.  Why?  Because my frugal, wealth-building ways almost became a victim of my own pride, ego, and arrogance. For a moment, I almost let irresponsible feelings of vanity get the best of me, and I wanted to, as Dave Ramsey so eloquently puts it: “Buy things I don’t need, with money I don’t have, to impress people I don’t like.”  This how it happened:

My parents were unable to attend Memorial Day weekend at our family cabin, so the responsibility of getting their boat to the lake fell on me. 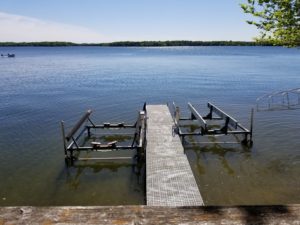 To do this, my dad handed me his keys to his brand new truck on Friday, and his luxurious new truck became my car for the next few days.  I’d never driven a brand-new, expensive vehicle for an extended period of time before, so I didn’t know what I was getting into.  As I drove his truck around town, it’s shiny exterior, and computerized interior started to seep into my psyche.  I started to feel richer and more powerful than I really am because I was driving a car a few steps above my budget.  I felt people noticing me at gas stations and stop lights.  My prideful, egotistical awareness-of-self became even stronger when I got to the cabin and hooked his awesome boat to the back of the brand new truck and began to tow it down the road.  Now not only was I driving a brand new truck, but I was also towing a trailer with a boat on it that anyone would be envious to own on a hot and sunny summer weekend in Minnesota. 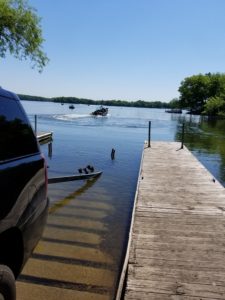 The feeling intensified as I drove the boat to the boat launch early on Saturday morning.  I could almost feel other people at the launch watching me as I stepped out of the truck, and got it ready to launch it.  I knew I was embodying the image of money and power as people noticed me at the boat launch.  I was under 40 years old, relatively handsome (I’m not ugly 🙂 ), and I was at least presenting the image that I was rich enough to be driving a brand new truck with an awesome boat attached to it.

I felt the arrogance and vanity of someone who enjoys flaunting their wealth and money as I launched the boat.  I sized up all the other trucks and boats that were there, and beamed with pride that the rig I was driving was one of the newest, shiniest, and most expensive in the parking lot.  Since I’ve always driven cheap cars around, and lived more like a Millionaire Next Door pursuing stealth wealth, than a Debt Leverager always trying to finance tomorrow’s money to live a top-shelf life today, I had never really experienced the intoxicating feeling of looking so rich before.

Before falling victim to my own vanity this past weekend, I had never really understood why people go into debt to purchase things they can’t afford.  But this weekend, I experienced how powerful a human being can feel when they try to appear to be rich, even if they don’t own any the luxuries they’re showing off.  I suddenly understood how even a very smart person could find them in a dangerously, over-leveraged situation.  Sometimes, I realized, extreme debt-acquisition is more about fueling the prideful, egocentric feeling that you create by making yourself appear smarter, richer, and more powerful than you really are because of the expensive things you own.

I mean look at what happened to me this weekend:  I’m one of the most frugal, humble guys you could ever meet.  I’ve been able to build a $300K financial portfolio in five years even though my wife and I have lived on a relatively average income.

But suddenly, after only a couple of days of driving around a brand new truck and boat, I even caught myself getting sucked into the prideful feelings associated with being rich and powerful, and thinking, “Maybe I should get a truck like this for myself.“  And to be totally honest with you, I wasn’t thinking about getting one because I needed one.  I was wanting one, because I liked the way it made me feel.  I wanted to own a massively expensive liability because it made it easier for me to flaunt my wealth, and therefor made it easier for me to feel smarter, richer, and more successful than the other people I was around.

I am embarrassed to admit this, but it’s true.  That’s why the title of this post is:  “Don’t Be Me This Weekend.”  Thinking like this is not the way to build real wealth.  This mindset will lead to bankruptcy eventually.  Because at some point, anyone over-leveraged with debt, will encounter a financial market with a floor that will unexpectedly drop out from underneath them.  Once there is no longer enough money coming in to pay for all of these financed things, the over-leveraged person will lose everything.

I recently read a quote from the book, Sapiens, by Yuval Noah Harari.  In the book, the author wrote:  “One of history’s few iron laws is that luxuries tend to become necessities and to spawn new obligations (to acquire them.)  Once people get used to a certain luxury, they take it for granted.  Then they begin to count on it.  Finally they reach a point where they can’t live without it.”

After a weekend of driving around in a brand-new truck, I started slipping into the “luxury trap” perfectly described above.  I started to believe that I couldn’t live without a new truck of my own, and maybe, it was worth sacrificing some of my future wealth to acquire more of the prideful, egotistical feelings that made me feel good today.

But I am enough of a philosopher to use My #1 Skill of Successful Investors to look into the future and imagine if a brand new truck would really make me feel that much better in the long term.  I realized that even if I bought my own luxury vehicle, where would the addiction to the prideful feelings end?  Would I then crave a new McMansion to store my new car and boat in?  Would I then want designer sunglasses, and clothes, and brand new mountain bikes, and golf clubs to go with my house, car, and boat?  So that everywhere I went, I could feel the envy of people looking at me, and wanting to be me?  Even if they knew nothing about me, or how confused, empty, and lost I really felt about why I was buying all these things that I really didn’t need?

Once I was able to play these scenarios out in my head, I realized I didn’t need these luxury items in my life.  I suddenly had a lot of empathy for people who get caught in this luxury trap and create a prison of debt for themselves that seems impossible to escape.  I understood it, because I was that person this last weekend.  I had got a taste of the powerful drug that is vanity, and I just wanted a little bit more, and a little bit more, and who knows how deep that rabbit hole would have gone if I had chosen to follow it.

Luckily at the end of this weekend, I didn’t have the guilt, shame, or sickness of realizing I had taken out a big loan to buy things I don’t need, to impress people I don’t like.  I simply had to return the keys to my dad, and climb back into my inexpensive 2004 Toyota Camry with 210,000 miles on it.  I had to remind myself that I may not have a brand new truck, or boat, but I am planting the investment seeds that will one day lead me to wealth beyond my wildest dreams.

So in conclusion, if you want a life of financial freedom, and the ability to create the life in your dreams, NEVER, EVER, EVER think like I did this last weekend.  Buying expensive things won’t make you bigger, smarter, or more powerful than you already are.

Have you ever made purchases, or possessed luxury items that made you feel like this?  How did you break out of the cycle of feeling like you need them to be happy?