Falling In Love: How To Become A 2-Person Adventure

Amanda’s and my life changed drastically the first few months we were married in 2015.  Falling in love was the easy part.  Becoming a mutually-beneficial, two-person adventure was the hard part!

A week after we were married, we bought our first home and moved in together. Our two different personalities crashed together, and fairly quickly, we realized that we had to learn an entire new language to happily co-exist together.  This is the story about how we did it, and our journey to find the happiness we both dream of.

We got married for the right  reasons (we thought).  But as we soon found out, married life is HARD to figure out!

Adventures on the ski hill

It was easy falling in love. We thought we wanted the same things: a stress-free life, and we valued our spiritual relationship with God as our most important priority.

We both dreamed of living an adventure with a purpose deeper than a 40-hour work  week.  We wanted more out of life than waking up to a mailbox full bills every day, and only 52 weekends a year to enjoy our real lives. More than anything, we wanted the freedom to find ourselves, our purpose, and our reason for existing, so we could truly enjoy as much of our lives as we could. We had to come to a conclusion of how we were going to build this stairway, to our dreams, together.  This is where our journey to creating Wealth Well Done began. 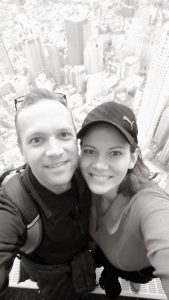 On top of the world at One World Trade Center

Before we define anything further about Wealth Well Done, let’s go even further back. Back to the day I first met the woman who would become my wife, and the seeds of our journey to find wealth were planted.

I met my wife, Amanda, one random Friday night in 2013 at a church bonfire.  It was after dark when I arrived; the moon was out and the air was warm.  I could smell the smoke from the fire as I got out of my parked car and walked into my friend’s backyard where the party was happening.

I saw a flickering fire in the distance.  About 20 people were socializing around the fire, their silhouettes appeared in and out of the shadows. I heard their voices laughing as I approached, and as I got closer, I heard different parts of their stories being told. As the flame light danced between the friends I knew, I strolled into the group, and noticed my future wife standing on the edge of the shadows, mostly hidden in the darkness.

I noticed her right away because I was a single man, and I thought she was the cutest girl there.  But as my eyes adjusted to the darkness, I saw there was a problem with the image coming into my brain. As I surveyed my surroundings, I saw she wasn’t alone. Deep in the shadows, there was another man with her, and she was smiling and talking to him. Dang it, I thought, she’s taken.  As I looked around the rest of the fire, I realized there were far more men at this event than women.  It was a disappointing feeling to realize I probably wouldn’t meet the woman of my dreams here, so I decided to settle in to the scene, and try to make some new friends.

Rocking out at a concert

One conversation led to another, and I ended up meeting another woman who came to the bonfire with my future wife.  We had a good time talking, and as the fire turned into a glowing pile of coals, we shared snapshots of our life stories.

Women talk to each other.  After leaving the the bonfire, my future wife learned more about me through her friend’s description of me. Unfortunately, it wasn’t the most flattering story.  My wife’s first impression of me was that I was a 30 year-old-man, dreaming of being a writer, with no job, and living in my parent’s basement.

Let’s just say that description didn’t inspire a ton of confidence that I would one day see her again. We parted ways that night, never thinking we’d see each other again.

A few days later, I learned a friend was going to be in my neighborhood so I invited him over for lunch.  Like best guy friends do, he showed up to lunch with two beautiful, smart, passionate women he met at church. One of them was the same woman I saw in the darkness at the bonfire.  I had no idea I was meeting my future wife for the first time. 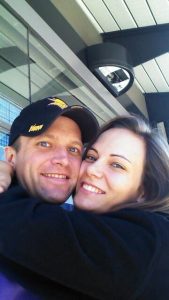 Waiting for the train to a NFL Vikings Game

The four of us sat around and talked deeper over lunch.  It was the first time Amanda got to hear my full life story, from me directly.  As I faced this attractive woman, I explained that I had just moved home from Green Bay, Wisconsin.  I was only staying at my parents house for a temporary time until I could find my own house.  Yes, I one day dreamed of being a writer, but I also had a job to support myself while I pursued my dream.

As she listened to me talk, she realized that the man sitting in front of her was a lot more confident, experienced, and driven than she first assumed.  I could tell she was interested in my story, and my natural charm begin to turn on a little stronger.  She began to smile back at me a little wider.  She said she was single, and that’s all I needed to hear.

Romantic sparks began exploding all around us.  The world seemed to shrink down and we forgot the other couple were in the room with us. Our conversations spiraled us into a deeper place, and we asked each other about our spiritual beliefs. We quickly discovered we treasured our relationship with God more than anything else.  Check. Neither of us wanted to be stuck in an ordinary job, or an ordinary life.  Check. We both thought our lives were meant to be an adventure, and we both craved the ability to blaze our own trail to find our purpose in life.  Neither of us wanted the same boring path of college, career, and retirement that we saw so many other people take.  We both wanted to become whoever God wanted us to become. It felt like we were talking to a person we were destined to meet.  It felt like we were falling in love.

Lunch ended sometime late in the afternoon, and as she left, we hugged goodbye.  It was deeper than a normal hug.  It was hard to think of anything else for awhile.  The weekend after that, we went on our first date.  We were engaged within the year, and we were married six months after that.  Time flies when you’re having fun. 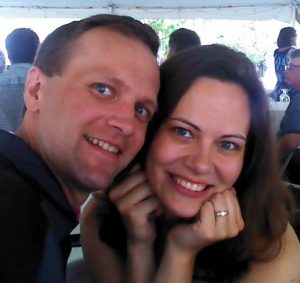 But this isn’t a blog describing how wonderful and perfect our romantic relationship has turned out to be. Because the beginning of our marriage was hard and rocky.  We’re both extremely strong-willed people, and it wasn’t easy for us to give up control and trust the other person.

The ways in which we learned to overcome the challenges we faced, and find success on our journey together, became our story and our reason for living.  We were walking one day in the nature preserve behind our house when we realized that simplicity, purpose, unity, and happiness is the path to finding wealth.

The idea for Wealth Well Done began as a story documenting the path to this lifestyle that we have found.  It is about taking the path to developing the attitude, intelligence, and character to find wealth. 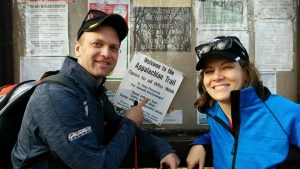 Hiking part of the Appalachian Mountains

In our marriage, we have found that it’s the things that don’t cost us any money that makes us the happiest and brings us the greatest feelings of wealth.  It’s no longer all about warm, fuzzy feelings and falling in love for us.  Feelings change and evolve.  Now it is about learning how to work together to fulfill the purpose we were created for.

In conclusion, don’t waste your money on trying to find your answers in things you don’t need. Build your character, and allow that journey to lead you to your dreams. Liberate yourself from material status, and find yourself in being a value to others.

Commit to living your own dreams, so you’ll never be trapped as a character in someone else’s dreams again. Take the risks that you were born on this earth to take. This is the spirit of the Wealth Well Done project you’re exploring now.