Two weeks ago, I went on a mountain-biking adventure with the mysterious, anonymous, and million-view blogger, Physician on Fire.  At the end of the day, I asked him this question: “What personality traits have been the biggest roots to your success?”  His answer to that question is at the end of this article.

Before I go any further, here’s a few facts about Physician-On-Fire so you can see why he is an interesting person to read about and learn from:

3)He’s worth about $3 million dollars, and has reached financial independence.

4) His blog, PhysicianOnFire.com, gets a million + views a year.  Here’s a snapshot of his annual blog-views: 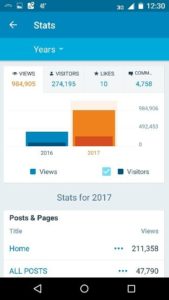 I’m just a normal guy, who enjoys growing my net-worth.  So how did I end up going on a mountain-biking adventure with an extremely-wealthy, internet-famous writer?

The answer is pretty simple:  I just asked him.   After meeting him at a happy-hour event earlier this year, I sent him a message on twitter and asked if he wanted to hang out and go golfing or biking in person.  He replied back that same day and said, “Sure, Sounds like fun.”

I hope you’re already asking yourself the next important question to this story:  Why would I reach out to someone I barely knew and ask them to spend the day mountain biking and becoming friends?  The logic is pretty simple in my daring and inquisitive mind.  The logic is based on a quote I heard a long time ago, and still live by today.  It reads:

“If you want to know who you are, just look at your friends.”

Now let’s explore this logic a little bit, as it holds important insight into what it takes to create wealth.  Your potential as a human being is limited to the brain-cells in your head.  But one way you can increase your potential, is to incorporate the brain cells of other smart and talented friends into your life.  To summarize the point I am trying to make:  Life is a team-game, and your success will be determined by how talented your team of friends is.

After driving 100 miles, I met the Physician-on-Fire at the beginning of the Cuyuna Lakes bike trails.   For a man worth $3 million dollars, you might assume he’d arrive in a luxury car with a brand-new $5,000 bike on the back of his car.  But that’s not what happened, or who he is.  He drove into the parking lot in a normal looking, Chevrolet, with an unremarkable mountain-bike stored in the trunk.   There was nothing flashy about him, or his entrance.  In fact, if I hadn’t met him previously, I couldn’t have picked him out of the crowd.  That was my first insight as to what financially-independent, multi-millionaires really look like.  On the outside, they look like everyone else.  It’s on the inside, where they’re the most fascinating. 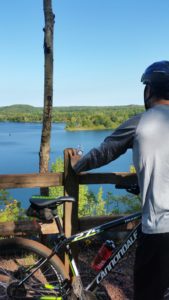 After locking our cars, we headed out on the trails together.  Biking through the trails was like unpacking a gift full of dirt, speed, and adrenaline all at once.  We climbed switchbacks, and shot down chutes and high-banked turns deep in the forest.  Mountain biking is one of the most thrilling sports I’ve ever experienced.  Your brain is forced to compute complicated equations of speed, gravity, and risk, extremely quickly, and your body has to flow with the trails.  The scenery we passed was stunningly beautiful as we rode the trails that were created out of abandon iron-ore mines.

We stopped to talk occasionally, and I enjoyed getting to know him on a deeper-level.  Not because he has a-lot of money, or because his blog is a huge success, but because he was an honest, thoughtful, and humble human being.  Simply put, he was real, and that’s the most basic human trait that makes people likeable.

As we biked and talked, I searched for nuggets-of-wisdom that I could share in this story.  I searched for clues about what makes unique?  What makes him special?   I avoided asking the cliché questions, like: What is it like to be a multi-millionaire?  (Because his lifestyle wasn’t much different than mine.)  Or, what is your favorite investment strategy?  (Because he invests in the same things I do.  The only difference is that he is passionate about being as tax-efficient as possible, because when you’re a high-income earner ($200,000 – $400,000), the government can take $100,000+ a year out of your paychecks in taxes if you’re not paying close attention to where your money is going.)  You can read more about his thoughts on money at:  PhysicianOnFire.com 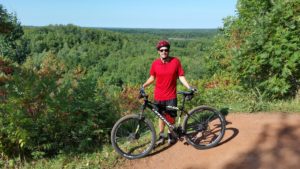 I started to get inspired once we began talking about the personality-traits he has utilized to help make him so successful.  This blog is ultimately about helping you achieve your dreams.  So I wanted to find insight that could help anyone — no matter who you are, or what you want out of life — achieve the life you dream of.

So I asked him, “What personality traits have been the biggest roots to your success?”  This is how he responded:

The First Trait of Success:  Competitiveness.

He thought his competitiveness is a personality-trait that has greatly aided him.  But he doesn’t always compete against others.  He competes against himself.  He is fully-aware of who he was in his past, and is always trying to compete with himself to become a better person tomorrow.  That self-competitiveness pushes him to find creative ways to learn, try, and grow beyond his comfort zone every day.

It’s this competitiveness that inspires him to save more money today, than he did yesterday.  It is also the trait that pushed him to write more content, and better content, to grow his blog from its first view to its millionth view over the last two years.

The Second Trait of Success:  Pride in your word.

“I hate letting people down,” he said.  “My words and actions are important to me.  So if I say I’m going to do something, I do my best to follow through on my promises and get it done.”

For example, I looked down at his hand.  It was covered in bandages.  Earlier in the week, he had nearly amputated his finger doing routine maintenance on his bike rotor.  The injury had sent him to the emergency room two days prior, and left him with a tuft fracture, bandages, and half-a-dozen stitches where his fingernail used to be.  He was forced to send me a text that night, and we were both nervous that we may have to cancel the adventure if the injury wouldn’t allow him to grip his bike handle-bar. 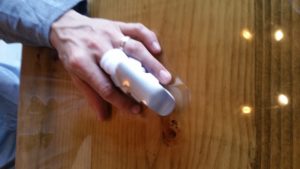 But I could tell in his face he didn’t want to let me down.  He didn’t want to cancel something he said he was going to do.  I could tell it was important to him to follow through on his promises, even if injuries and adversity got in his way.  The pride he took in his actions, is what pushes him to be at his best, even when life gets hard.

The Third Trait of Success:  Relationships.

It was very easy to see that he values relationships just as highly as I do in life.  Why else would he have devoted most of a Saturday to go biking with someone he barely knew?  Because he knows that building awesome relationships with cool people is one of the greatest keys to unlock the doors of endless adventures in life.  We may not need each other today.  But we may be able to open doors of adventure for each other in the future.  There is no better time than the present to make good, healthy, positive friends who can change the trajectory of your life.

Financial intelligence may seem complicated.  But to him, financial-intelligence is pretty straight-forward and easy.

Simply, as he said, “earn more than you spend, and be as tax-efficient as possible,” as you invest your leftover money.  That is the recipe for anyone to create the wealth, and become financially independent. Once you have more money than you need, stop worrying about making more money, and invest your life into things you care most about in life.  For him, it’s his family and philanthropic passions.

Eventually, our biking adventure ended, and we shook hands.  But before I started driving home, he made one final statement to me before I left.

“On the bike trail, you asked me a question.”  He stated. “You asked if I know what I want out of life yet?”

“I’ve been thinking about it since.”  He said, “And the truth is, I think I have found everything I want.”

“So that’s why you want to spend more time enjoying what you have.” I replied.

That is the essence of being truly wealthy, I thought.  I drove home; proud of the new friend I’d made who pushes me to be a better writer, investor, and overall human-being.

So what do you think?  What personality traits have helped make you successful?